Dear Reader,
to commemorate the 50th anniversary of The Casimir Pulaski Museum in Warka, we present you with an exhibition by Andrzej Pitynski – the most well-known Polish sculptor in the United States.

The subject matter of the exhibition is no coincidence; it fits perfectly with a long standing tradition of our Museum, which features Poles who make world art history, working and living in the USA. 2017 also marks Andrzej Pitynski's 70th birthday celebrations and the 50th anniversary of his career as Master Pitynski, who remains more recognizable in the US rather than in Poland. Master Pitynski has dedicated his talent and long years of work to the United States, but remained a Pole at heart.

The concept of freedom which meant so much to Casimir Pulaski – our Museum's hero – has been familiar to Andrzej Pitynski and moved him on many levels. Pitynski has been drawing inspiration from the freedom fight of the nation that raised him; the memory about his ancestors, to whom he owes so much; the respect for his homeland, which he is devoted to. Horses, which are his favorite animals, have also formed a source of inspiration. They are featured in many of his works, both monumental and intimate ones. They are always depicted with great force of expression and freedom, with different textures, and often accompanied by a rider. Horses have been the symbol of untamed freedom, the beauty of nature, time, wind, fire, war, triumph, energy, true friendship, and even death. To Master Pitynski, horses have been a part of his life since early childhood. When he was a little boy, his grandfather would teach him to horse ride, and both equitation and sculpture have become his great passions. He used to take part in equestrianism competitions and performed tricks. Horses are also featured in his unusual, expressive drawings. Equitation is a beautiful sport, an art in itself, which many wish to master. "However, only a person who penetrates and fully understands the horse's mind and not forcibly but sensibly reaches an agreement with the animal can be granted this honor," said Wilhelm Museler, author of a famous coursebook on horseback riding. When we look at Pitynski's sculpted and drawn horses, there is no doubt in our minds that this horseman artist understands horses like no other.

The notion of freedom plays a crucial part in many areas, but in no particular one is it more important than in art. Andrzej Pitynski was able to show the world the truth behind Polish history, crimes against the nation, and the 20th-century regimes, precisely thanks to his freedom of choice: he was free to choose the place of creation, its form, and artistic language. He deliberately and consequently produces realistic monumental creations, which are understandable for all and which openly speak about the important and hard elements of life. "My Katyn monument against Manhattan's skyscrapers gained another dimension after the attacks of 9/11. Americans understood what a knife to the back means," says the artist. Did he wake up the world's conscience? A Polish officer, with his mouth gagged, his back pierced with a Soviet bayonet – yes, it is a warning against criminal totalitarianism, out there for future generations to see. Andrzej Pitynski's monuments placed in the public sphere have won a broader, more universal meaning, which is of great importance not only to Poles. They have become a symbol of freedom, independence, and the good prevailing over the bad. These are the reasons why Pitynski is one of the most recognizable sculptors in the United States.

During the exhibition, visitors will have the chance to see miniatures (sketches for sculpture) of the most famous American monuments, such as: Katyn –1940 in Jersey City, NJ; Flame of Freedom – Katyn 1940 in Baltimore, MD; Sarmatian – Spirit of Freedom in Hamilton, NJ; Avenger in Doylestown, PA; and Swiatowid – Space, conquer of die, in Hamilton, NJ. The exhibition features monument photographs purposefully taken to familiarize the viewers with Master Pitynski's work, even if only on paper. You will also be able to see two sketches for sculpture connected with monuments unveiled in Poland: Blue Army in Warsaw (1998) and Patriot in Stalowa Wola (2011). Another substantial part of the exhibition includes more intimate equestrian sculpture (Horsewomen, Horsemen, and Dreamers) and historical sculpture (Kircholm, Cedynia, Wolyniak, Attack, Siberia, Pope John Paul II – Pilgrim of Peace, and Warsaw Uprising 1943-1944.)

Portrait sculpture plays another important role in Andrzej Pitynski's creations, with the artist immortalizing distinguished figures from the political and artistic milieus of the United States and Poland. He portrayed among others: US President Jimmy Carter, Artur Rubinstein, Frederic Chopin, Ignacy Jan Paderewski, Maria Curie-Sklodowska, Casimir Pulaski, Tadeusz Kosciuszko, Pope John Paul II, General Wladyslaw Anders, and Fr. Jerzy Popieluszko. The realistic bronze busts faithfully depict not only the facial features of the great, but also their characteristic traits. The artist often uses the back of his sculptures to present scenes from the lives of those portrayed, their characteristic symbols and emblems. He purposefully gives prominence to some surfaces by employing different textures, while polishing and smoothing others. The exhibition features two busts of General Wladyslaw Anders, which Pitynski donated to the Polish Army Museum in Warsaw, Poland, and the other one of Polish-American activist Edward Pinkowski, borrowed from the Poles in America Foundation, founded by the portrayed visionary.

Reliefs, plaques, and medals form yet another significant part of Master Pitynski's creations. The exhibition would not be whole without a collection of historical and patriotic medals. Col. Michal Krupa's Epitaph Badge constitutes a truly remarkable one. This epitaphial relief is dedicated to Andrzej Pitynski's mother's brother, who was one of the most resilient Polish partisans, and the last soldier from the "Wolyniak" Home Army's National Military Organization. He continued to fight until 1959. Betrayed, he was captured by the post-war communist Security Office, and sentenced to death. He surrendered to save his family, and spent the next ten years imprisoned in Strzelce Opolskie in south-western Poland. Col. Krupa was buried at a cemetery in Ulanow. Pitynski immortalized the patriotic and rafting traditions of his hometown of Ulanow in many reliefs and plaques. In 2015, his hometown became home to a small Andrzej Pitynski Museum, thanks to the generosity of the Master himself and the efforts made by local government authorities. Ulanow Mayor was kind enough to help us include a substantial part of Ulanow's collection in our exhibition.

The exhibition features two models of monuments designed over the last couple of years with Poland in mind. The first model is a design of a monument dedicated to the crash of the Tu-154M plane in Smolensk that killed 96 people, including Poland’s president. The other one is the monument entitled "Wolyn Massacre," currently being cast in the production plant Gliwickie Zaklady Urzadzen Technicznych.

Andrzej Pitynski's drawings and sketches complement the exhibition, further enhanced by multimedia presentations depicting family photographs and sculptures which cannot be shown as part of our exhibition. A gallery of charcoal drawings, which hit the viewer with a full force of expression and an emotional charge truly shows the artist's masterful technique. Master Pitynski has been drawing since he was a little boy. His interest in sculpture, form, and space started with dynamic sketches, consisting of only a few thick strokes. The featured drawings and sketchbooks not only complement the sculpture exhibition, but also enable the viewers to reach a deep understanding of the creation process and the Master's technique. Andrzej Pitynski's drawings are charged with energy and encompass the freedom of expression and creation.

Fifty years ago, the Polish-American community and Warka town boosters made efforts to open The Casimir Pulaski Museum. Simultaneously, Master Pitynski took his first steps as a professional artist. Today, Pitynski is one of the most recognizable Polish artists in the United States, ranked among world's leaders. He is a valued professor with the Johnson Atelier – Technical Institute of Sculpture in Mercerville, NJ. Reuben Nakian, Alexander Ettle, George Segal, and Isaac Witkin have all come to know and appreciate his work. Pitynski is a member of the elite National Sculptor Society, and has earned many awards and much recognition throughout his career.

The Casimir Pulaski Museum in Warka cultivates the memory of distinguished Polish Americans living and working in the United States, and we derive great satisfaction from the fact that we are able to open Master Pitynski's exhibition to the general public. We wish to commemorate and thank Andrzej Pitynski for his efforts and the joy of creation he exudes, as well as for his eternal memory of his homeland – Poland.

We would not be able to launch this exhibition but for the kindness and dedication of Andrzej Pitynski himself. I wish to thank him for accepting our invitation and all his help in staging it. I would like to thank Prof. Andrzej K. Olszewski with wife Irena Grzesiuk-Olszewska, PhD, Anna Rudek-Smiechowska, PhD, and Peter Obst from Philadelphia, PA for their support. I also thank all institutions and individuals who lent us exhibits: Ulanow Mayor Stanislaw Garbacz, the Andrzej Pitynski Museum in Ulanow, The Polish Army Museum in Warsaw, Edward and Jack Pinkowski (Poles in America Foundation), Witold Zych from Tarnobrzeg, and Gliwickie Zaklady Urzadzen Technicznych CEO Tadeusz Wojarski.

I wish all visitors unforgettable experiences, many emotional moments, and an abundance of positive emotions.

Iwona Stefaniak
Director of The Casimir Pulaski Museum in Warka

Organized in cooperation with: 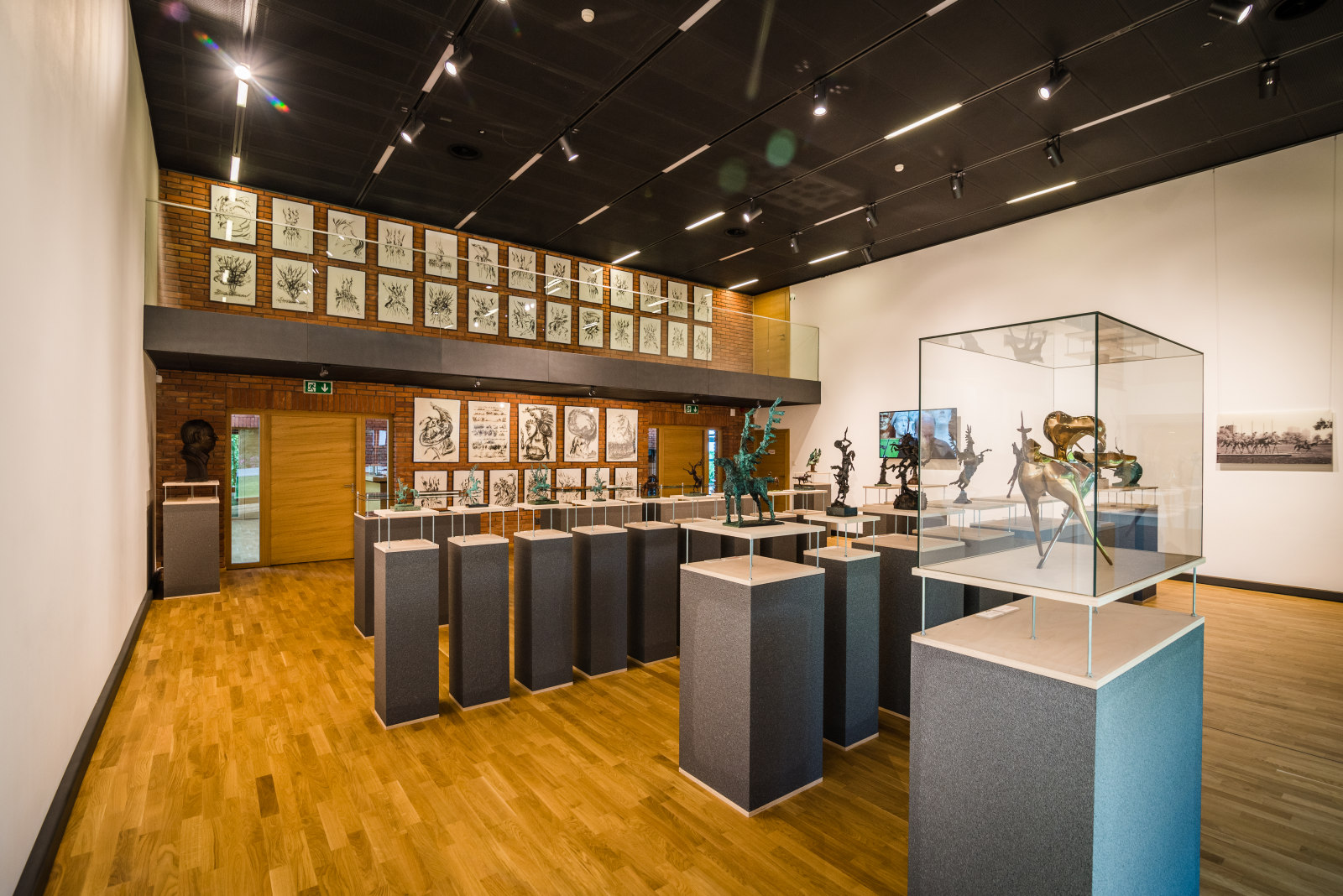 Fifty years of creation constitutes a long enough period for the general public to feel authorized to assess an artist's career. In case of Andrzej Pitynski, an incredibly active artist, it is better to evoke the sports term 'flying finish,' which concludes a singular, very long stage.

Pitynski is considered a 'Polish-American' sculptor, although, if we take the character of his creations into consideration, the meaning of this expression goes beyond national matters and his country of residence. Pitynski introduces new content to the American culture, which so far has come to appreciate only two Polish motifs – Kosciuszko and Pulaski.

Thanks to him, America has become home to the first monuments dedicated to commemorate the victims of the Katyn Massacre (Doylestown, PA, Jersey City, NJ, Baltimore, MD.) For many years, the subject of the massacre was taboo in Poland, and even beyond our country's borders, this subject was uncomfortable.

Pitynski's patriotic stances are visible not only through references to particular events or historic figures, but also in his approach to the Sarmatian culture, characterizing old Polish nobility, knighthood, and horsemanship, with 'Partisans' (Boston, MA) and 'Sarmatian – Spirit of Freedom' (Hamilton, NJ) being perfect illustrations thereof. Sculptures and reliefs unveiled in Poland feature similar patriotic subjects, combined with religious motifs.

Andrzej Pitynski has not been looking for avant-garde or experiments in the form of his sculptures. He remains true to the tradition of realism, believing strongly in sculpture being legible in its content and symbolism for all viewers.

The exhibition at The Casimir Pulaski Museum in Warka features a fragment of the artist's rich heritage; however, it constitutes an important cultural event, enabling Poles residing in Pitynski's homeland to establish a connection with this extraordinary artistic soul.