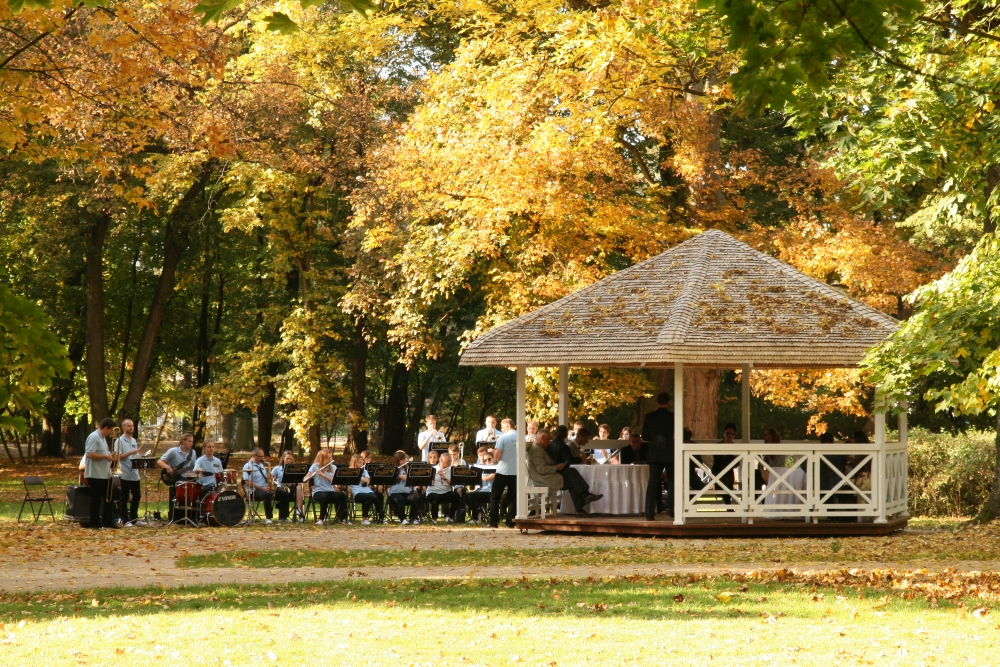 Winiary Landscape Park was established in the late 18th century and revitalized in the 19th and 20th centuries, with the most recent work done in 2013 and 2014. Beautifully located on an escarpment in an oxbow lake, it is one of Warka's most picturesque venues, where you can truly feel the spirit of the place. Tourists leave the park enchanted with its charming atmosphere, untouched nature, and copious stories. The park holds a special place in the hearts of the local residents.

The rich and mysterious history of the park is full of legends passed on from generation to generation. Some trees are considered natural monuments and remember Casimir Pulaski. Rumor has it that the park was Casimir Pulaski's favorite playground, and Tadeusz Kosciuszko rested underneath one of its linden trees.

Its oldest parts appear to lie along the road from the west, parallel to the escarpment, running from Warka and passing in front of the manor, as well as the road from the north, leading from the fields, perpendicular to the axis of the building. Once lined with linden and oak trees, those roads were the main avenues leading to the manor.

The park used to hold local species such as linden tree, oak, elm, maple, ash, chestnut in addition to trees from other continents. Visitors could rest in the shadow of a catalpa or plantain trees as recently as the 1950s. Currently, the most beautiful trees are several-centuries-old branching oaks and linden trees, which are over a century old.

In the upper part of the park, you can still see traces of old paths and remains of old buildings, such as a romantic arbor from the 19th century and farm building foundations. In 1999, the romantic colonnade (a part of the arbor, also called 'ruins alluding antiquity') was reconstructed. In the center of the upper park stands a statue of Casimir Pulaski, unveiled on October 13, 1979, and designed by Warsaw sculptor Kazimierz Danilewicz.

In the northern part of the upper park stands a wooden Third Millennium Chapel with the Sorrowful Christ by sculptor Stefan Lisowski. The figure was made from an old ash that was struck by lightning. Another place frequented by locals and tourists is the legendary chapel of the Blessed Virgin Mary, located on the escarpment slope.

Follow the slope and you will find yourself at the Pilica River, and on your way you will see an educational nature trail, full of informative tables. Thanks to them, you will be able to learn about the plants and animals that make the Pilica River Valley. The Winiary park is a bird enclave, in which 47 bird species have been confirmed.

The lower park is a Pilica River oxbow lake, pierced by a network of water channels. Here and there, you can see fragments of a former vineyard. The entire park is part of the NATURA 2000 program of protected land, which signifies adherence to the European Council’s "Habitats" and "Birds" Directives, which protect wild natural habitats and many bird species.

Wednesday through Friday from 10 am to 5 pm
last admission at 4 pm
technical break from 1 pm to 1.30 pm

Saturdays and Sundays from 11 am to 6 pm
last admission at 5 pm
technical break from 2 to 2.30 pm