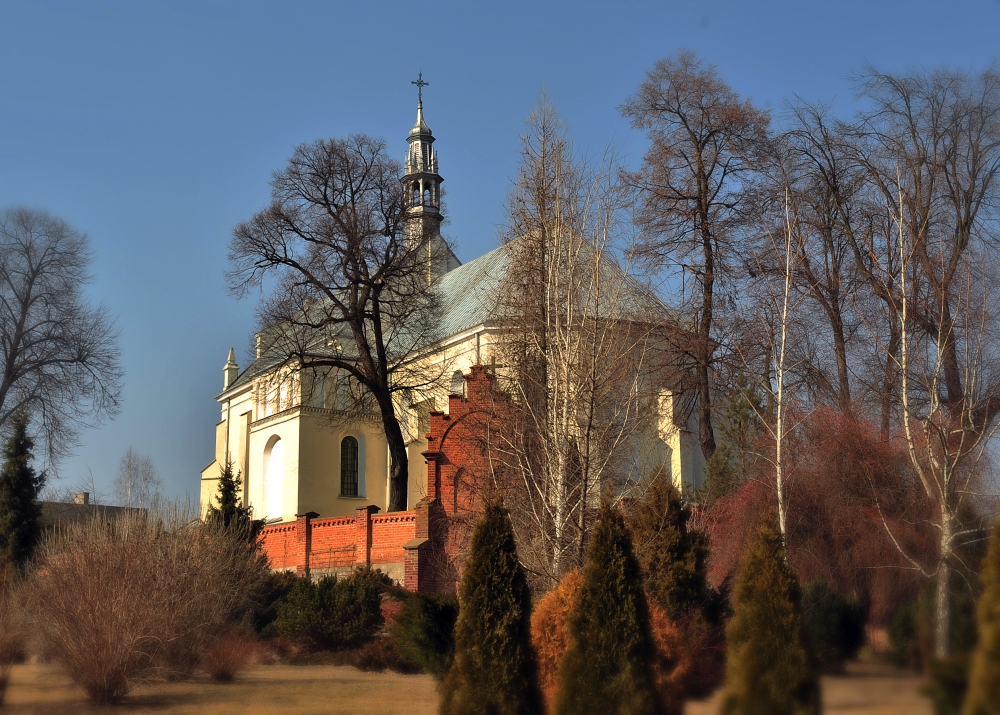 The parish was probably founded as early as the 12th century. Today, the parish church has St. Nicholas the Bishop in its name, but previously the name included the Holy Virgin Mary, St. Nicholas, St. John the Baptist, and St. Catherine. The wooden church was consecrated in 1501. About 1603, the community started to build a brick church. The work continued in the years 1623-1635, after an interruption caused by a great fire in 1616, which damaged the entire town. The church was rebuilt as a single-nave building with a three-sided closed chancel and two symmetrical chapels. The building suffered greatly during the Swedish Deluge. However, it was yet again rebuilt in 1836. Over the course of the following years, the building slowly collapsed, and services were often held in the Franciscan church. A general renovation took place in the early 20th century thanks to pastor Fr. Marceli Ciemniewski. The church building was severely damaged during World War II, but was rebuilt in 1948.

The church is said to be the final resting place of the Ciolek family, which was legendary in the 14th and 15th centuries. Its most prominent member was Stanislaw Ciolek who, as rumor would have it, was so strong that he was able to break horseshoes, squeeze sap from tree branches, and even singlehandedly carried a great bell to a church in Ostroleka, which forty strongmen before him could not do.

The richly decorated church interior has been preserved. Worth seeing is the main altar from 1610 with the image of the Virgin Mary and Child adorned with silver.

At the base of the church, as seen from the Mostowa Street, visitors will find a well called "Dziekanka." Water from the well has been said to have magical powers.

The contemporary vicarage was designed by Prof. Wiktor Zin, who is a prominent architect, known for his appearance on the TV show "With pen and charcoal" (Piorkiem i weglem).

The Post-Franciscan Church of Our Lady of the Scapular 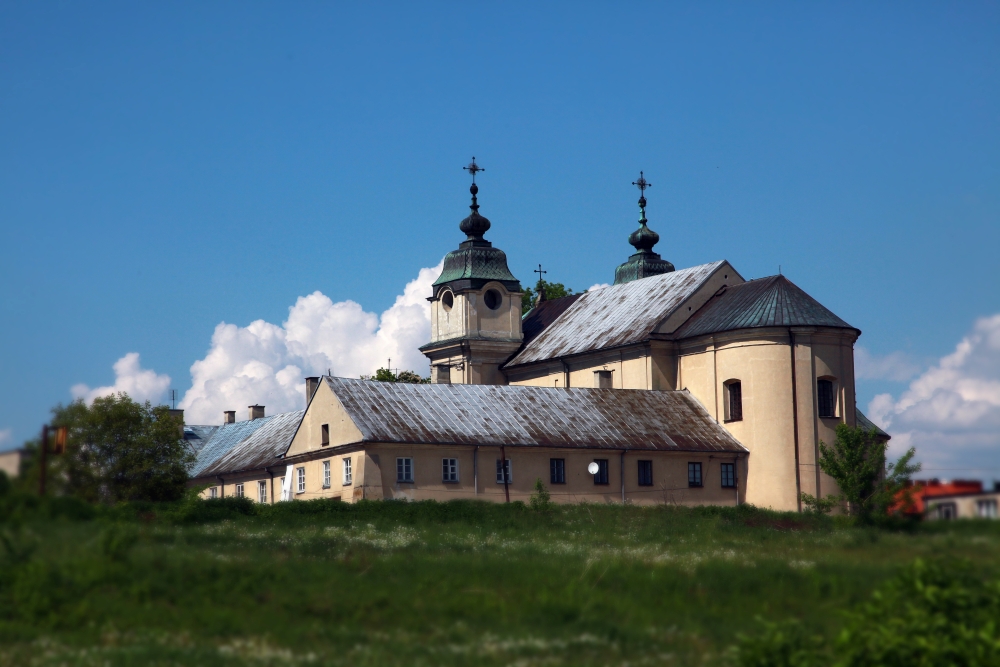 The Franciscan Order was brought to Warka in the 1720s by the widow Katarzyna of Boglewice. They received a plot of land, a donation in the amount of 8,000 Polish zlotys, and the little St. Leonard's Church. In the years 1632-1634, the Franciscans built their own wooden church. A brick building with a main altar devoted to Our Lady of the Scapular was constructed in the years 1652-1746 as part of the Franciscan church and monastery complex. One of the project's patrons was Wladyslaw Grzegorzewski, who was Castellan of Ciechanow and a benefactor of many local places of worship.

In the late 18th century, the monastery buildings were used for land court proceedings and for a civilian and military commission of the Czersk Lands. From 1864, Russian troops were stationed there, and the church building housed a school and vicarage. The early 18th century was a time when the great confessor, preacher, guardian of the suffering, poor and abandoned, the Blessed Rafal Chylinski (d. 1741) worked at the monastery.

One of the church's most valuable assets is the image of the Holy Mary and Child from the 17th century, painted on wood. The underground crypts hold remains of Mazovian Princes Trojden I, Ziemowit III and Duchess Anna Danuta, mentioned in the novel "The Teutonic Knights" by Henryk Sienkiewicz, which were brought here from the damaged Dominican Church. Worth seeing is also the newly reopened inner courtyard, surrounded by a cloister. 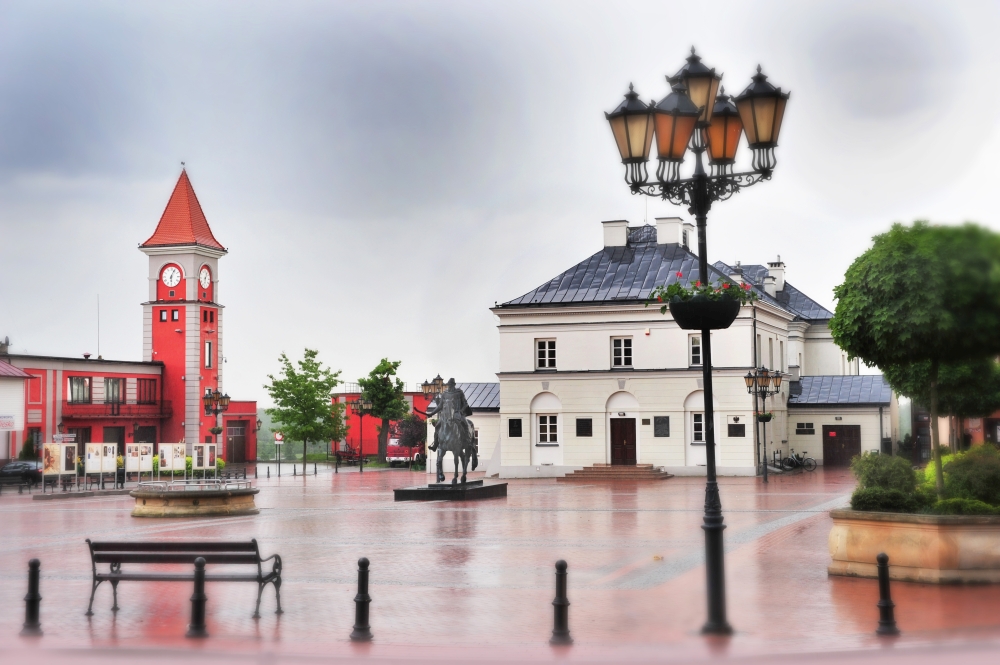 A small square has always been the heart of Warka. However, it was not always located in the present place. Warka was situated in what is now occupied by the village of Stara Warka. Later, the square with the Town Hall were located in a place now known as the old cemetery, near the former St. Anne's Church. When exactly the town square was placed where it is today remains unknown. In 1956, in connection with the 300th anniversary of the Battle at Warka in 1656, the square was named for Stefan Czarniecki. In 2013, the authorities unveiled an equestrian monument of the Hetman.

The symbol of the town square and the entire town is, naturally, the Town Hall. Sources tell us that in 1742, it was made of wood and located in the middle of the square. The building was destroyed during the 1750s. The current Classicistic Town Hall was built in the early 19th century in the southern part of the square. Sources from 1845 describe the building as: "of brick, covered with ceramic roof tiles, medium-sized, in which The Municipal Council holds its meetings." Between the Wars, the ground floor housed offices of the Town Board, and the upper floor was the residence of the mayor. During World War II, the building was severely damaged. In the years 2007-2008, it underwent a comprehensive renovation within the framework of the Local Program of Warka Town Revitalization. The work included building an addition to the Town Hall on a steep escarpment in the back of the existing building, and adding steps leading to the Pilica River.

Next to the Town Hall, one can see the building of the volunteer Fire Department with a clock tower, which plays the Warka anthem every day at noon.

Warka Market Square has always welcomed merchants and fairs. Today, at the square, one can taste Warka beer or a delicious apple pie made with Warka apples. 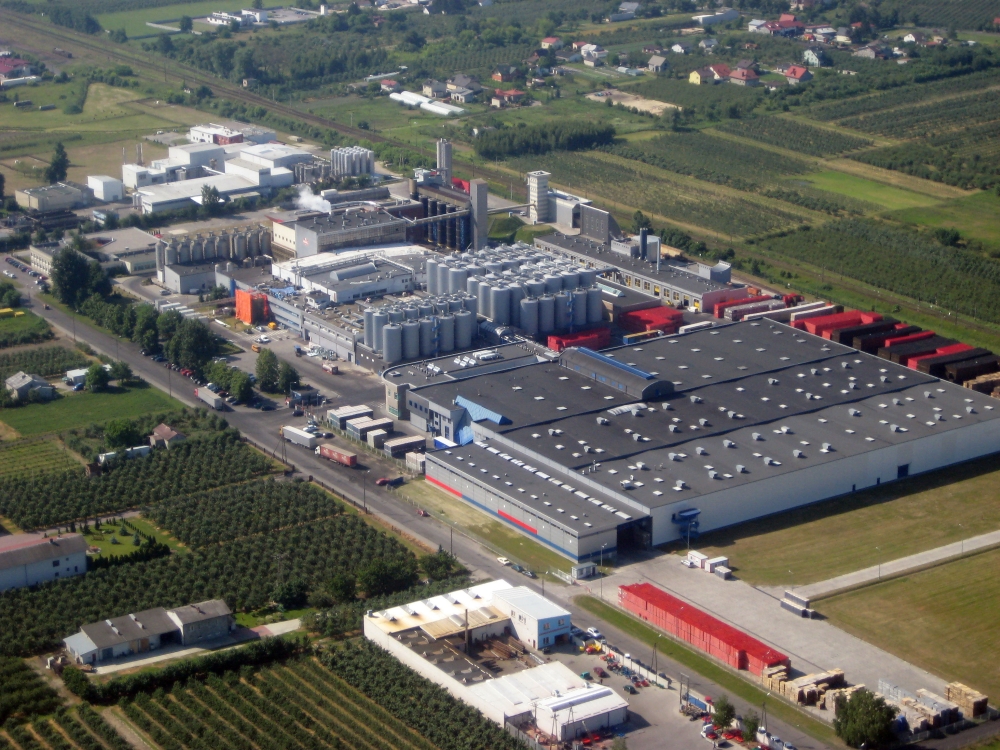 "Warka's prosperity has always relied heavily on its beer," says a passage from the 17th century, written by a geographer and historian of Mazovia Jedrzej Swiecicki. He has a point. The production and sales of beer, aimed mainly at the Warsaw market, has been characteristic of Warka trade for centuries. The privilege issued by Prince Boleslaw V on June 18, 1478, can attest to that fact. The Prince granted Warsaw city councilors the exclusive right to sell Warka beer in his court and in the Warsaw City Hall. The inventory of royal lands showed a great number of brewers. This goes to show just how popular this product was in Warka. Warka beer reached its greatest popularity in the 16th century both in Poland and abroad. A famous anecdote connected with Papal Nuncio Gaetano made Warka beer much sought after in the whole of Europe.

You are welcome to visit the Warka Brewery. During the tour, you can learn about its history and the traditions of beer brewing in Warka. The local brewery is one of the most modern breweries in Poland, and its highly qualified employees see to the high quality of the beer production process on a daily basis.

The Brewery can be toured as part of a group after giving advance notice. A group is a considered to be a minimum of 20 visitors, and bookings can be made at centrum.rezerwacji@grupazywiec.pl.

Sielanka on the Pilica River Hotel ****

The hotel is a perfect spot for everyone who appreciates contact with nature and is looking for some peace and quiet, unaffected elegance and to slowly savor the beauty of life. A wall of Stromiec forest on one side and the picturesque Pilica River valley on the other will provide a visitor with tranquility and relaxation in beautiful natural surroundings.

Sielanka is located on the southern Pilica River bank, only 50 km (30 miles) from Warsaw, which makes it easily accessible for conferences and individual visits. It is a great starting point for those willing to discover the beauty of Warsaw's environs, including the Pilica River valley, with kayaking on the Pilica River, Warka's historic sites, The Casimir Pulaski Museum, the educational trail at the Warka Brewery, and Grojec district orchards.

With over 100 hectares (250 acres) of land on the Pilica River, the four-star hotel has a horse-riding center with full infrastructure and a new full-size soccer field as well as a training field, accredited by the UEFA. It is a perfect place to quickly regain energy, rest on your holiday, or spend a quiet weekend near Warsaw. The hotel complex is surrounded by beautiful forests, vast meadows, fishing ponds and picturesque corners, which are ideal for picnics and resting close to nature.

Are you looking for active rest or a relaxing, blissful weekend? Warka environs and Sielanka on the Pilica River Hotel in particular are a perfect spot for you. You can go kayaking, take a carriage ride, and practice your shooting, biking, and horseback riding skills. We offer you over 100 hectares (250 acres) of hiking trails with plenty of fishing possibilities. For those looking to rest in the intimate atmosphere of their hotel rooms, we offer you 4-star hotel accommodation, a spa and wellness center with an indoor pool and water area for small children, restaurant, café, wine cellar, and inn. Our hotel welcomes families with children. During one weekend trip, you will be able to take advantage of our hot tubs, picnic areas, and spa, while your kids play on our playground, ride the pony, play badminton, beach volleyball, and visit our indoor playroom. We hope to see you soon!