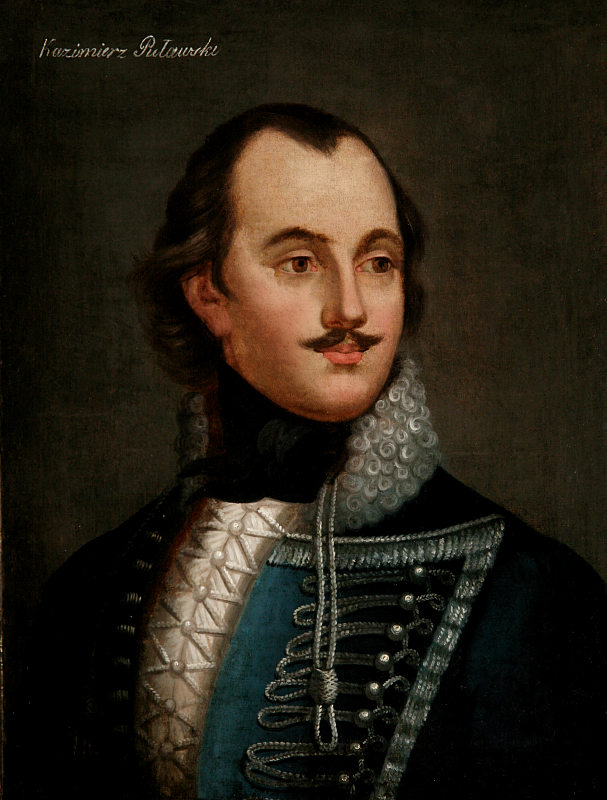 Casimir Pulaski changed the course of history for not one, but two states: Poland and The United States of America. Called the Hero of Two Nations, Pulaski fought in the Bar Confederation, which polarized Poland between 1768 and 1772 and is today often referred to as the first Polish national uprising, and the American Revolutionary War in the years 1775-1783, which is widely known in Poland and beyond as the American War of Independence.

General Pulaski was born on March 4 or March 6, 1745 in Warsaw at the home of Warka District Governor Jozef Pulaski. His mother was Marianna from the Zielinski family. He spent his childhood in Warka and its environs, and attended a local parish school. Later, he graduated from a Warsaw-based Collegium Nobilium run by the Theatines. In 1762 and 1763, the young Casimir served at the court of Prince Karl Christian Joseph of Saxony, Duke of Courland and son of Augustus III, King of Poland, in Mitau (today’s Jelgava, Latvia). This time was crucial in shaping his life, and highly influenced his political stances. Courland, part of the Duchy of Courland and Semigallia, was, at the time, a vassal state of the Polish-Lithuanian Commonwealth. Catherine II of Russia, also known as Catherine the Great, took great interest in this territory, which soon became a battleground. Pulaski had a firsthand experience of the conflict when Russian troops besieged Mitau in February 1763. Prince Karl Christian was humiliated and exiled, and Pulaski saw Russia's force and learnt about Catherine's true intentions toward Poland.

Russia was moving closer and closer to a military confrontation against Poland, and its interference in Poland's internal matters loomed over the Commonwealth. Polish nobility struck back. On February 29, 1768, they drafted and adopted a declaration of confederacy in a Carmelite monastery in the town of Bar in the historic region of Podolia (now Ukraine). They chose to defend their rights, Poland's independence, and Catholic faith. The Bar Confederation's main leaders were Michal Krasinski, a brother of Kamianets-Podilskyi Bishop named Adam Krasinski, and Jozef Pulaski, father of Casimir Pulaski, who took the role of the troops' marshal and military commander.

Casimir Pulaski, along with his brothers Franciszek and Antoni, began to gather nobility forces to form cavalry regiments. The resulting Polish-Russian war continued for five years. Its battlefields were scattered all across the country, from today's Ukraine, Belarus, and Lithuania, through Lesser Poland, Greater Poland, and Mazovia, to Pomerania at the Baltic Sea. Casimir Pulaski's military talents showed very soon into the war. He defeated Russian troops at Pohorele on April 20, 1768, and was able to hold off the enemy at the city of Berdychiv (now Ukraine) for two weeks. In the spring of 1769, Pulaski defended a fortress at the meeting of the Zbruch and Dniester rivers called Ramparts of the Holy Trinity. By the time he was made Confederation marshal of the Lomza district in August 1769, he and his troops had defeated Russian military forces on several other occasions. His biggest military success was yet to come – in 1770 and 1771, Casimir Pulaski successfully and heroically defended Jasna Gora monastery in Czestochowa against the sieging troops of Russian commander General Ivan Drevitz.

On November 3, 1771, his brilliant military career in Poland came to an abrupt end. At the time, Poland was ruled by King Stanislaw II August Poniatowski, the last king and Grand Duke of the Polish–Lithuanian Commonwealth. One of the most polarizing figures in Polish history, the king was a true patron of arts, and once a lover of Catherine the Great. On this fatal day, the king was abducted. After his release, the king charged confederates with attempted regicide, listing among others Casimir Pulaski. The military hero was to be executed, so he chose exile. This is how a new chapter in his life began.

For several years, Casimir Pulaski wandered around Europe. He stayed in Germany, Turkey, and France. His longest stay was in Paris, where he was introduced to American commissioner Benjamin Franklin. Franklin wrote him a letter of recommendation to General George Washington, which read "Count Pulaski of Poland, an officer famous throughout Europe for his bravery and conduct in defence of the liberties of his country against the three great invading powers of Russia, Austria and Prussia, (...) may be highly useful to our service."

Having arrived in Boston in July 1777, Pulaski joined General Washington in organizing rebel cavalry forces. He participated in the Battles of Germantown and Haddonfield. During the Battle of Brandywine, Pulaski made history with his courageous charge, which saved the rebel cavalry units from being defeated and averted danger to General Washington's life. As a result, Congress awarded to Count Pulaski a commission as Brigadier General in command of all cavalry of the American forces. In 1778, Pulaski formed the famous Pulaski's Legion, which ardently fought during the Siege of Charleston.

Pulaski paid the final price for his courageous fight for independence in America. On October 9, 1779, he was seriously wounded in the Battle of Savannah, GA, and died several days later. George Washington received Pulaski's saber, and on November 17, 1779, issued an order for identifying friend and foe when crossing military lines: "Query: Pulaski, response: Poland."

General Pulaski is today referred to as the Father of American Cavalry. Many communities across the United States have paid tribute to him by unveiling memorials in his honor. His name is perpetuated through American towns, streets, counties, schools, associations, and organizations. He is universally praised as a fighter for independence, which was inscribed into Pulaski's Legion Banner: non alius regit (no other governs), placed around the all-seeing eye of God, and unita virtus fortior (united valor is stronger). Pulaski is described as consistent, clear-headed, diligent, fearless, noble, and endearing.

October 11, the day on which Casimir Pulaski died, has been celebrated as Casimir Pulaski Day in the United States since 1929. In 2009, President Barrack Obama signed a joint resolution of the House and the Senate which made General Pulaski an Honorary American Citizen (111th Congress Public Law 94).

The memory of Casimir Pulaski in Poland is also alive and well. His name is on a Polish navy vessel ORP „Gen K. Pulaski”, Casimir Pulaski University of Technology and Humanities in Radom (Uniwersytet Technologiczno-Humanistyczny im. Kazimierza Pulaskiego w Radomiu), and other schools and organizations. Warka is among one of many entities to be proudly using the hero's name. A street and residential complex in Warka-Winiary, a local school, and other organizations paid tribute to Pulaski by adopting his name. The Casimir Pulaski Museum is a living tribute to the Hero of Two Nations, which keeps his memory very much alive.